The first step is admitting you have a problem

It’s been a while since the last post, but sadly not a whole lot to report on the miniature front.

The Persians have been assembled (at least one army) and await some paint.  Sadly, they will join the Romans in the land of lower priorities.  The new town apparently has a wargame club.  They are dedicated solely to Warhammer 40000, but at least it gives me some regular games and the odd short term project.

This is my second game with the new club.  And coincidentally my second game in about 7 years or so.  My models are dusty and sadly many have not faired well through the various moves in that time.  Anyhow, onto the 4 player game.

I paired up with a Nurgle dedicated Chaos player.  I played my Iron Warriors.  We faced a combined force of Dark Angel Space Marines and Tau soldiers.  This was played with 40K 6th edition rules with each force consisting of 2000 pts (4000 to a side). 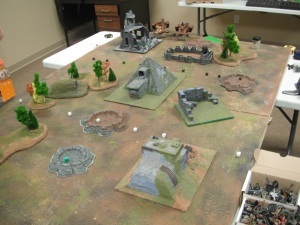 The field of battle.

The combined forces of Dark Angels and Tau that fought against the Chaos alliance. 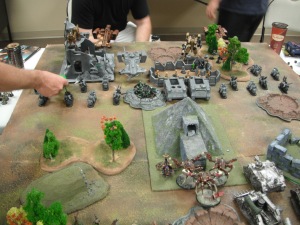 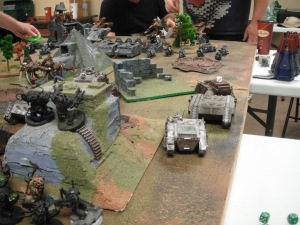 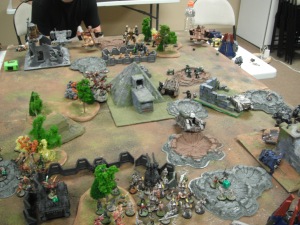 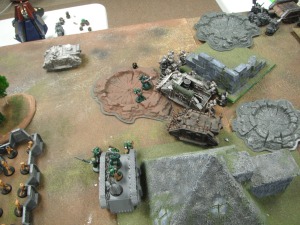 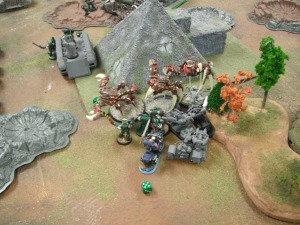 The game was a loss for the forces of Chaos, and my Iron Warriors did not fair very well under new version changes.  I guess it will force me to learn to play differently since I will not spend a fortune to rebuild this force.

But it has prompted some new projects. 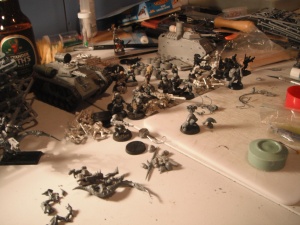 No longer organized my workspace has been over-run by quite a few projects.  On the table right now are repairs, single models to get finished for a rag-tag Imperial Guard planetary defence force, and a few conversion/sculpting projects.  Included in there are guards I got years ago for free, a few Necromunda models, and a couple of APCs I bought to go with the guards.  There is also the in depth conversion projects of Chaos bikes (using demon horses instead of motorbikes), possessed soldiers, and an elite Chosen squad.  All of the Chaos models will be used to flesh out my Emperor’s Children army as they went from a viable sized force to a small detachment.

I also threw together a few pieces of terrain in a hurry for my first game (not pictured). 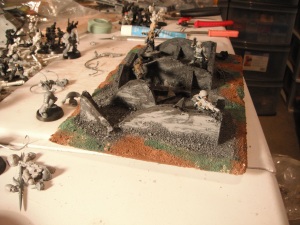 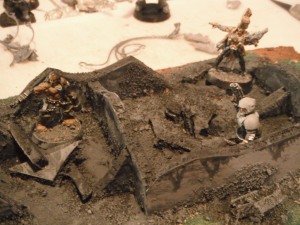 One of two sets of ruins.  Foam-core on MDF base with sand and flock to finish the effect. 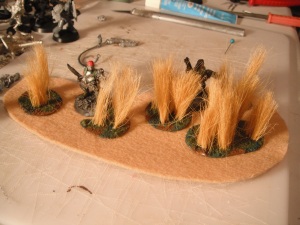 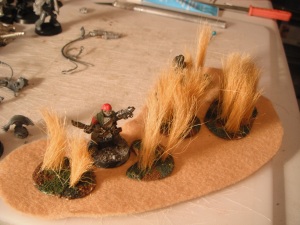 A more generic terrain piece.  Growing up on he prairies, something that has always struck me as a good battle terrain would be tall grass.  At first brush it doesn’t seem to hinder movement.  But…hidden holes, large rocks, and even the weight of the grass when it gets wet can slow you down.

Now, I’m not the first person to do terrain for tall grass, but as nice as floor mats and other pieces look, the effect is lost when models stand on top of the grass.  So I went with a compromise.  I based the tall grass flock and then use an area template.  Not perfect, but it captures the feel and look of a patch of tall grass.  I may eventually do enough to cover a board.  The next bases I do I will definitely keep the grass a bit shorter.  For 40K and the “alien world” concept 7′ grass is ok.  3-4′ grass would be the ideal though.

Hopefully something here inspired somebody.  Next up will likely be some painted models (likely 40K) and maybe even some of the Ultra FUBAR Neo-Spartacus models I have been working on.