With the arrival of the weekend I have managed to squeeze a bit of hobby time in.  Since my kids were running around, the best option was painting as I was fairly certain I was going to get interrupted sculpting. 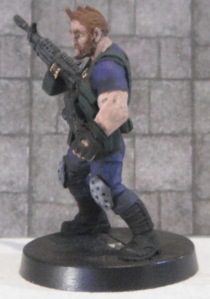 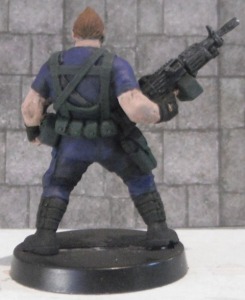 The first mini to get finished is the Hassle Free miniature Nomad.  As I mentioned in a previous WIP post, I intend to use him and the other two trooper types as generic “agent” types.  The dark blue I chose was to tie him to Nick Fury without directly tying him to only that role.

The dark blue suit could be a police or special agent uniform, possibly even some sort of colour blind special ops guy.  I elected to go with green web-gear and gun straps as I discussed before, I want him to look like he grabbed the biggest gun he could and then the only thing to hold the ammo wasn’t the new pattern the others use.

It wasn’t until I painted his beard and added highlights I realized he looks a lot like Chuck Norris.  If I decide to get silly in my super hero game, I can do the Chuck Norris version of him.

As he will be called Agent Nomad in my game, I figured it would be ok to show him with other SHIELD agents. 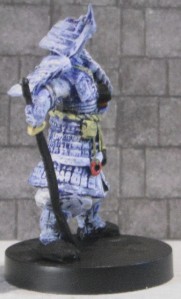 Another quick paint I did today was my version of the Silver Samurai.  I used Nakayama Hayato in Bones by Reaper Miniatures as a base.  He did have a banner pole, but the detail was soft on where it joined his back and the Silver Samurai was never depicted with one.

I painted this figure very quickly, start to finish I spent maybe an hour on painting him (outside of waiting for his primer to dry).  I started from a dark blue and worked up to white to evoke the bluish shadows of silver in comic books.  Even if he reads more white than silver, I am happy with the effect.  The only difficult part was drawing on random slashes to represent kanji on his prayer scrolls.  I am impressed with the model, but some details were a bit soft.  I may go and get the metal one at some point to paint as a traditional samurai.

If you are unfamiliar with the Silver Samurai, he was a villain who featured mainly in the Wolverine story line.  Although not a villain per se, he is definitely a bad guy.  On numerous occasions he partnered with villains and led organized crime syndicates.  His powers/abilities were a bit limited: he had his armour (very tough) and the mutant power to make his blade cut through anything.  In some stories he also had a teleporting ring.  All told, he was a very tough opponent, and he was a recurring threat to Wolverine not because of him being more powerful, but because of their past and close connection.

If you saw the Wolverine movie, you will know he faced the Silver Samurai, Gundam style.  Yes Gundam, giant fighting robot, although Gangnam style might work too for how I felt watching it.

Anyhow, to show him beside team evil, he has Dr. Doom.  Also featuring as my only other melee guy is Hulk.  I added in an ability I actually designed to reflect the two biggest fighting bad-asses from comics I like: Wolverine and Batman.  The ability is simple: double an opponent attack roll and get a free melee attack.  I originally wrote it to be any attack in short range but  realized it might be a bit over-powered.

Anyhow, I hope this little update inspired you today.  If nothing else, it can show that a quick and simple execution can give you a table-top quality figure in no time.